the last three weeks have just disappeared into a blackhole of… um. I don’t even know how to describe it. they are just gone.

work has been wretched lately. big deadlines and conflicting project schedules. long hours. boo hoo poor me. I’m gainfully employed with a great group of people and a great company and there shouldn’t be an excuse there but work has really been at the root of me not getting anything else done lately.

as Koach Koala can attest, my attendance and commitment to Koala’s workouts has been lackluster, shitty in fact, in the last two weeks. I’ve haven’t made any beach volleyball games yet. haven’t been running on my own. energy levels have been low. I’ve been eating like an American.

lastly, i’m stretched way too thin. see my weekly schedule below. note that it doesn’t include the other workouts for koalas.

something has got to give so…

in other news, because I really just cannot slow down…

this is me in my special test shirt at my volleyball tournament a couple weeks ago (isn’t that a hawt double chin?!): 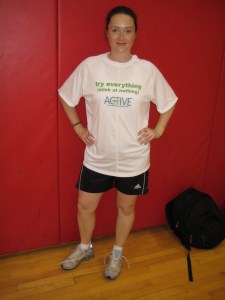 one half of it is treated with Agion Active and the other half isn’t.
from their website:
“Agion Active is the latest in stink technology for apparel and gear and is so new it’s not even on the market yet. The patented system is built into apparel and will eliminate odor from any source.”
Agion Active isn’t a clothing company – they make this awesome anti-stink stuff and it WORKS.
no joke. I sweated all day in that shirt, balled it up in a backpack and then pulled it out two days later and wore it for Koala’s run practise. one side was a bit smelly, other side… nothing. up next: hot yoga. my yoga mat is stank so if this shirt doesn’t get stinked up from it… it’ll be a miracle. as part of my testing I don’t really plan to wash the shirt, just to see what happens. will keep you posted! FYI – ME, always the voice of reason said it would be bad to wear the shirt everyday for a month for every activity as one side of it IS NOT treated. point taken.
I’ve also signed up for my races this summer:
Gravenhurst – sprint du – July 17-18
Bracebridge – sprint du – Aug 7-8
Wasaga – sprint tri – Sept 11 > I kinda just signed up for this one without looking at how far I’d have to swim. this sucker is 750m. oops. guess I’ll be hitting the pool.
and one last thing. I’ve got a four day bootcamp for PMP coming up in June. I have to study for an exam and I have to have work sheets done and a bunch of stuff memorized by then! dude. I haven’t written an exam in years and haven’t had to memorize anything since approximately HIGHSCHOOL. balls.

This site uses Akismet to reduce spam. Learn how your comment data is processed.